Trademark Law in the Supreme Court: Resolving Two Circuit Court Splits – Licenses in Bankruptcy and Damages in Light of Intent 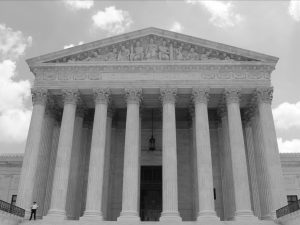 The Supreme Court will rule on a trademark case it heard during this session regarding trademark licenses in bankruptcy and will soon decide if it will hear another trademark case regarding infringer’s intent when awarding damages.

In this case, the Supreme Court is looking at the question of what happens when a bankrupt party exercises its right to reject a trademark license as it goes through the bankruptcy process.  While this is a breach of contract (which is a settled area of Bankruptcy Law), because this case deals with a trademark license, the Court needs to decide if rejection of the contract terminates the rights of the licensee or allows the licensee to maintain those contractual terms which were not breached.

Trademark licenses are the most prevalent type of Intellectual Property license, so this unresolved area is vast.  A trademark owner can license the use of its mark to another party, but in order to protect consumers, it must exercise control over the nature and quality of the goods or services being offered by the licensee under its trademark.  If a trademark owner fails to properly police the use of its licensee, it may fall victim to what is called naked licensing and lose some, or all of its rights in the trademark.

In Mission Products, the Court is being asked to evaluate whether trademark licenses should be treated the same as other intellectual property contracts in a bankruptcy proceeding.  Bankruptcy Law, in section 365(n) of the code, allows a bankrupt party the right to reject a patent or copyright license.  This, in turn, grants the non-debtor licensee the right to either treat the contract as terminated by rejection and assert its damages in the bankruptcy proceeding, or treat the contract as merely breached and retain its rights under the contract (i.e. any exclusivity provisions, continued use of the IP rights granted under the contract).

The respondent (the bankrupt company Tempnology, who wants to rescind the entire license) asserts that a bankrupt party should be able to cancel a trademark license lest it be forced into the position of deciding between either maintaining the burdensome obligations of monitoring its trademark license -or- allow the license to become a naked license and potentially lose the value of the trademark.

While the petitioner (the licensee Mission Products who wants to be able to maintain the contract as merely breached) asserts that quality-control is an inherent burden of owning a trademark and whether in bankruptcy or not, the owner must maintain the integrity of its mark in order to assert trademark rights.  Its position is that the breaching party cannot void the entire contract, but rather has to allow the non-breaching party to maintain the property it has already obtained under the contract.

During the February 20 oral arguments, the Justices seemed to side with the petitioner.  Justice Sonia Sotomayor stated that it seemed “counterintuitive … or counterlogical” for “trademark [us]ers [to] get more rights than [the bankruptcy statute] provides to other” contracting parties. Justice Elena Kagan asked the respondent, if “what you’re saying is that [the bankruptcy statute] tells you … that you can unwind the entire deal … that’s not the effect of a breach outside of bankruptcy, certainly in the usual context.”  Clearly the Justice was wondering why trademark licenses should receive special treatment under the law.

It is important for trademark licensors to recognize that this ruling could allow licensees to maintain rights in the license even after a bankruptcy.  We will be watching this case as the Court rules in the coming months.

Counsel in Romag Fasteners, Inc. v. Fossil, Inc., has applied to the Supreme Court to hear a case on whether trademark infringement need be willful to merit an award of damages.  We currently have a split among the circuit courts:

In trademark matters, a trademark owner’s actual damages are very tough to ascertain, often the only way to bring relief is to gouge the infringer’s profits.  “Profits awards … serve a vital deterrent purpose in protecting the public against counterfeit and falsely marked goods,” Romag wrote in its brief.  “An inflexible and atextual willfulness requirement sets the bar too high, depriving mark holders of an important remedy and failing adequately to deter infringement.”

It will be very interesting to see if the Supreme Court will rule on this and resolve the circuit split for trademark owners.  We will, of course, keep you posted!