The Mishap of Mystery: Banksy Struggles to Protect His IP While Preserving His Anonymity by Danielle Maggiacomo and Srinidhi Krishnan

Danielle is an experienced trademark attorney and Counsel at Jayaram. Shoot her a note at dmaggiacomo@jayaramlaw.com. 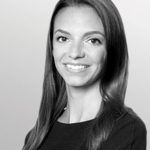 While the world wonders about his identity, Banksy’s graffiti art is no secret to any of us. Banksy rose to fame in Bristol during the 1990s, and shortly after gained international recognition. Whether or not Banksy was simply trying to avoid charges of criminal property damage, his mysterious persona has enormously contributed to his success.

With fame came opportunistic infringers, and Banksy needed to protect his intellectual property in a way that felt authentic. Over the years, Banksy has been critical of copyright, declaring it “for losers”, and allowed his work to be widely photographed, reproduced, and disseminated. Further, the European Union Intellectual Property Office (“EUIPO”) noted that “it would be quite difficult for Banksy…to actually enforce copyright rights against third parties” because his identity, thus the ownership of the rights, cannot be legally determined. And so, it is speculated, Banksy turned instead to trademark protection.

Through his legal entity Pest Control Office Ltd, Banksy registered several his most famous images as trademarks with the national IP offices of the European Union, United Kingdom, Australia, and the United States. However, over the past few years Full Colour Black Ltd., a U.K. greeting card company whose products feature Banksy’s artwork, has successfully cancelled several Pest Control’s EU trademark registrations. Most recently, Full Colour Black prevailed in cancellation actions against Banksy’s famed images Radar Rat, Girl with an Umbrella, Bomb Hugger, and Laugh Now But One Day We’ll Be In Charge. The EUIPO held that the works were never intended to be used as trademarks and thus were filed in bad faith. The EUIPO noted that it was clear when the trademark applications were filed, Banksy did not intend to use the works as source-identifying trademarks, and actual use was made only after Full Colour Black had initiated an earlier case. 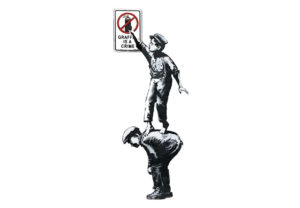 That use was made in 2019 when Banksy set up a London storefont called Gross Domestic Product. Customers could view products through the window and make purchases online after entering a lottery and completing a vetting process. Banksy admitted that everything in the store was “created specifically to fulfill a particular trademark category under EU law” and that he “had the legal sheet pinned up in the studio like a muse.” Banksy created a public record of having no genuine interest in using his artwork as a trademark on commercial products, other than these token sales to maintain the validity of the trademark registrations.

Full Colour Black also argued that Banksy used his fraudulent EU trademark rights to obtain registered trademark protection in the United States without having to separately prove use of the marks in the U.S. Typically, U.S. applicants are required to prove use of their trademarks in commerce before a registration will issue. However, this proof of use is not required of foreign trademark owners who meet several procedural criteria and are able to provide a copy of a valid foreign registration for the mark. The EUIPO did not comment on this issue for reasons of procedural economy, having already found the bad faith allegations fully successful.

It remains to be seen whether Full Colour Black or others will continue chipping away at Banksy’s trademark portfolio. The rules of each jurisdiction vary, though it may be some time until Banksy’s other registrations become vulnerable to cancellation for non-use or are due for maintenance filings that would require proof of use of the marks. However, the EUIPO’s finding of bad faith intent at the time of filing has likely paved the way for additional cancellation cases based on this cause of action.

These decisions seem to cripple creativity by forcing artists like Banksy to risk losing anonymity to take advantage of copyright because trademark protection is not available. Yet, it is important to recognize these cases featured uniquely bad facts. Trademark protection remains available for artistic works if there is genuine use or intent to use the work as a source identifier for commercial products or services. The burden of proving bad faith intent is on the claimant, and it is not a low bar. Banksy publicized his intent to circumvent trademark law requirements and his goal to obtain an exclusive right for purposes other than those falling within the function of a trademark. Thereby sealing his fate.