The MetaBirkin: To Be or Not to Be 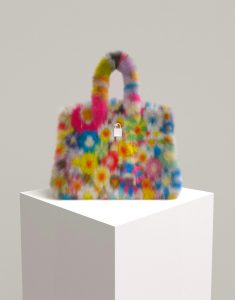 Can you imagine owning the elusive Birkin bag? Starting at around $10,000, for most people this would be considered out of reach, out of budget—even out of this world—in terms of expense and extravagance.

As a trademark attorney, I try to teach my daughter as much as I can about brands and the importance of protecting what belongs to the people that create them. We often discuss brand name clothes, shoes, stores and purses. We spend time dreaming of what it would be like to own a wardrobe full of Christian Louboutin’s or Jimmy Choo’s with shelves full of Stella McCartney or Louis Vuitton purses and, of course, the ultimate: an Hérmes Birkin bag.

The Hérmes Birkin bag came into existence in 1984 when actress Jane Birkin sat next to the Hérmes Executive Chairman and complained that there were no bags suitable for young mothers. Jean-Louis Dumas quickly sketched a rectangular-shaped bag with space for a baby bottle—et voila!—the Birkin was created. Since that day, the Birkin has become the quintessential bag to own. Each bag is made by hand and coveted around the world. The demand for these bags has become so high that it has led to an extremely extravagant resale market. I have even seen pre-owned bags for sale for up to $550,000.

So, how about a digital version?

The Birkin Bag, never far from the fashion media’s attention, has recently found its way back into the headlines of the mainstream press but not for the reason you may think. With the rise of non-fungible tokens (NFTs), it was almost inevitable that someone would attempt to profit from a tangible work of art and turn it into a digital work of art as an NFT. NFTs, as many now know, are digital assets that can be purchased using cryptocurrency. Mason Rothschild, an interdisciplinary artist, has created digital fur-covered bags in the same shape as the famous Birkin bag, coining them ‘MetaBirkins’.

As you can imagine, Hérmes is not happy about this. The renowned luxury brand almost immediately sent a cease and desist letter to Mr. Rothschild and followed up by filing a complaint in a New York Federal Court on January 14, 2022.

The question here is would you, a regular consumer, be confused by the MetaBirkin bag? Would you believe that Hérmes had created them and was now also joining the new trend of diving into the newly minted market of NFT sales? If so, then Mr. Rothschild has a problem.Hérmes certainly believes that consumers will be confused into thinking that the MetaBirkins are made by Hérmes and carry the same high quality that Hérmes is known to deliver. Its complaint against Mr. Rothschild claims trademark infringement, false designation of origin, false descriptions and representations, trademark dilution, cybersquatting, injury to business reputation and dilution, and misappropriation and unfair competition under New York law.

To win a trademark infringement claim, Hérmes will need to prove the similarity and proximity of the goods along with the marketing channels used, the strength of its BIRKIN trademarks, evidence of actual confusion, the sophistication of the purchaser, and Mr. Rothschild’s intent and purpose when he chose the shape and name of the MetaBirkin bag.

However, Hérmes may have issues arguing over the similarities between the goods. Hérmes Birkin bags are tangible leather goods. The MetaBirkin is, of course, a virtual handbag; it cannot be touched or physically used. The owner of a MetaBirkin is only in possession of a digital piece of artwork—an NFT.

As for the dilution claim, an owner of a “famous” trademark may bring suit against someone that is using their famous mark in such a way that it is likely to impair its distinctiveness or tarnish its reputation. Famous marks are those that are so well known that they deserve protection whether or not the unauthorized use causes confusion. Further, famous marks must be a “household” name and recognizable to the public.

Trademark owners take immense pride in the products and services they provide and they care deeply about their reputation. Consumers purchase certain goods because they know of the quality and workmanship of certain brands. Should an infringer come along and use a famous mark, attempting to make consumers believe that the infringing product is in some way connected to the famous mark, it can be detrimental to the famous mark and brand.

So, with the Birkin mark, the initial inquiry is whether the Birkin name and configuration of the bag are “famous” or “widely recognized by the general consuming public of the U.S. as a designation of source of the goods or services of the mark’s owner.” Two of the factors that are commonly used to determine whether a mark is, in fact, famous from a dilution perspective are “the duration, extent, and geographic reach of advertising and publicity of the mark, and whether it is advertised or publicized by the owner or third parties,” and “the amount, volume, and geographic extent of sales of goods or services offered under the mark.”

For now, MetaBirkins have been taken off the virtual shelf of several websites where you can purchase NFTs but not before some of them were already sold. Who knows how this claim will turn out or what the outcome will be? This may pave the way for future NFT artists to either be able to use trademarks of famous brands out in the metaverse or it will put a stop to this type of use.

One thing is for sure—my daughter and I will still only ever be able to dream about owning one of these famed BIRKIN bags, whether it is an Hérmes Birkin or a MetaBirkin!