Reigning in the Metaverse: Congress Needs To Catch Up–Fast

Last month, someone paid $650,000 for a yacht in the metaverse. It was the highest price ever paid for a NFT asset in The Sandbox, a digital environment not unlike The Sims. 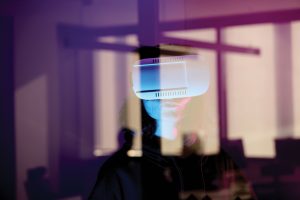 The yacht’s creator, Republic Realm, also develops and sells metaversal jet skis, speed boats, and even real estate, such as the Tikila Villa, which offers its owners “relaxed luxury and laid-back waterfront living with beach frontage and a personal pier” situated “on its own unique parcel of land” in The Sandbox. To own any of these assets, of course, one must first open a cryptocurrency wallet, fill it with a good amount of Ethereum purchased through one of several cryptocurrency exchanges, and create an account with the OpenSea marketplace, where the majority of NFTs and crypto collectibles are currently sold.

If any of this sounds confusing, then imagine how it sounds to our Senators in Washington, at least half of whom were in their forties, fifties, or sixties when the Internet took off in 1995. (The highest-ranking members of the Senate Judiciary Committee, Sens. Feinstein and Grassley, were both born during the Great Depression.)

You might ask, “Who cares whether Congress knows what an NFT is? Isn’t the whole point of cryptocurrency and smart contracts that they allow us to transact business and structure our obligations to one another without the need for, backing, or oversight of centralized authorities?” For some, yes; but for others—including most of our clients who are active in this space—the need for some basic ground rules is clear.

The virtues of cryptocurrency, and smart contracts in particular, are many. They can dramatically increase efficiency and reduce transaction costs (such as lawyers’ fees). They can also generate a degree of certainty by eliminating the cost of enforcing certain types of contracts. At the end of the day, however, when a smart contract or crypto transaction goes awry, the injured parties will inevitably turn to courts, which are ill-equipped to handle the complex and novel questions that will arise. Congress and regulators must step in.

This idea—that code can serve the same function as law—is not new. An illustrative example is etched into the origins of the metaverse, in the virtual world of Britannia, where a now-famous encounter took place. Britannia is set within Ultima Online, the longest-running massively multiplayer online role-playing game (MMORPG) in history and the first to reach 100,000 players. By 1997, thousands of Ultima Online players could simultaneously roam Britannia and interact with one another, a watershed moment in the early days of Internet-only games. Ultima Online’s creator, Richard Garriot, was known by his avatar, Lord British, the most powerful player in the game. One day, Lord British witnessed a thief stealing from another player. When Lord British commanded the thief to return the stolen goods, the thief did as he was told and begged for mercy. Lord British was satisfied. But as soon as Lord British walked away, the thief robbed again. Breaking character, Garriot told the thief that his Ultima Online account would be deleted if he kept stealing from other players. The thief pushed back, arguing that if stealing virtual goods was possible in Britannia, then it must be legal in Britannia. Garriot could have coded the software to make it impossible for stealing to occur; but he didn’t, so it must be allowed. After giving it some thought, Garriot agreed, and Lord British went on with his day.

This example underscores why some, like Harvard’s Lawrence Lessig, believe that the Britannias of today will require us to develop new bodies of law to deal with the challenges. According to Lessig, a constitution is not just a legal text, but an architecture that structures and constrains social and legal power. In the real world, that architecture consists of the rules and norms that shape our society. But in cyberspace—where “the very structure of the place itself . . . is a product of the software through which the user interacts with the ‘place’ and its ‘inhabitants’”—that architecture is made up of code. Like the thief in Britannia, Lessig argues that software can perform essentially the same function as a written constitution or statute.

Not everyone agrees. At a 1996 symposium on the subject, Judge Frank Easterbrook of the Seventh Circuit famously argued that a course in cyber law would be as pointless as a course in horse law: “Lots of cases deal with sales of horses; others deal with people kicked by horses; still more deal with the licensing and racing of horses, or with the care veterinarians give to horses, or with prizes at horse shows. Any effort to collect these strands into a course on ‘The Law of the Horse’ is doomed to be shallow and to miss unifying principles.” Easterbrook concluded that we should resist the urge to prescribe legal adaptations for cyberspace. “Only by putting the law of the horse in the context of broader rules about commercial endeavors could one really understand the law about horses,” he argued. Easterbrook’s position was premised on his belief that lawyers’ predictions about new technology are likely to be false.

Whether Congress finds Lessig’s or Easterbrook’s position more persuasive is beside the point. The point is that Congress has largely been absent from the conversation altogether, and the consequences of its failure to inform itself and build a basic framework will only grow bigger. Last month, the Treasury Department told Congress that federal regulators urgently need more power to regulate “stablecoins,” a type of cryptocurrency that could lead to bank runs, consumer abuse, and other disruptions unless Congress acts quickly; but Congress cannot stop there. It should create an entirely new federal agency and give it the resources it needs to study the Britannias of today—NFTs, digital currencies, smart contracts, the metaverse, etc.—so that they can propose concrete policies to promote stability, clarity, and a sense of order and uniformity across these rapidly growing trends. Only when our lawmakers have the empowering knowledge to guide these discussions will we be able to truly shape the metaverse we wish to see in the world.

Until then, we’re stuck with Lord British and the thief.