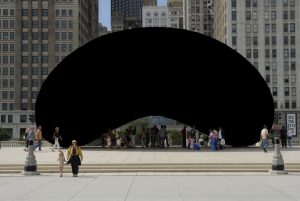 Cloud Gate, colloquially known as the Bean, is one of the most prominent symbols of Chicago. The artist, Anish Kapoor, has gained widespread recognition for designing the iconic Millennium Park sculpture.  However, in art circles, Kapoor is known as a divisive figure due to his monopoly on the “blackest black” color. Kapoor is the sole artist that has access to Vantablack acrylic paint. Vantablack is so dark that it absorbs 99.96% of light. Kapoor uses this nearly pure black paint to create the illusion of a void.

Artists have been outraged and confused as to how Kapoor is able to monopolize the use of a color. Colors on their own aren’t protected by copyright. Paintings or pieces of art that display an arrangement of colors can be copyrighted. Furthermore,  there are very few instances where shades of color can be trademarked. Brands can only trademark colors as part of a product, package, or service if: (1) they serve a source identification function; and, (2) do not serve a merely decorative purpose. For example, Louboutin has trademarked the iconic red on the bottom of its shoes. Tiffany’s­ has trademarked its signature shade of blue used on all of its packaging. However, these trademarks are limited to allowing these businesses to use a particular shade of color in its own industry.

Kapoor has not used any of these avenues to monopolize the use of Vantablack. Interestingly, Vantablack was not originally created as a paint color, it started as material used to limit light inside of telescopes. It was engineered and patented by Surrey NanoSystems, a company specializing in military and astronomy equipment.  Kapoor gained access to Vantablack through a licensing agreement. He was chosen as the exclusive licensee since the company claims that it is unable to produce enough Vantablack for widespread use.

There is precedent to patenting color. In 1960, French artist, Yves Klein, was issued a patent for International Klein Blue. Klein invented the paint using a unique process that stopped pigments from dissolving on light-absorbent surfaces. Thus, people are not challenging the validity of the patent itself. People are more so concerned with the artistic and even moral repercussions of a single artist having the monopoly on a groundbreaking color.

Because of his exclusive license, Kapoor has faced a lot of backlash from the art community. Artists started a protest on social media called “#ShareTheBlack.” Regardless of any intellectual property protection, people believe that color is a building block of art that should be available to everyone. In support, an artist named Stuart Semple started a kickstarter to re-create Vantablack. Semple is now selling an acrylic paint called “Black 3.0” that absorbs anywhere between 98% and 99% of light. He advertises his paint by saying that everyone can buy it, except Anish Kapoor.