On Our Radar: Xaviera Simmons 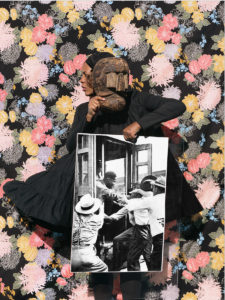 [INTERVIEWER] You obtained your BFA in 2004 from Bard College and completed the Whitney Museum of American Art’s Independent Study Program in Studio Art in 2005.  I think it’s safe to say that you’ve been a prolific artist who has consistently been making work since at least that time.   Technology, for better or for worse, has changed the world in extraordinary ways since you’ve been making art.  How has technology affected your practice?

[XAVIERA] That’s a great question and one that I do not get asked very often because on the outset it appears as if my work is very analogue and made by the hand- which for the most part it is because I love to have my hand on all of my works. Technology though has many forms so I might have to ask you to elaborate on what you mean by technology. In a sense we are all always using technology even in art via new paint colors, modern textiles, new language building and all forms of image making are advanced by technology, so we all incorporate it into our works whether we are aware of it or not.

Before the pandemic I flew on airplanes weekly, travelled globally and captured images everywhere and my vision was enhanced by travel, which is totally dependent on technology, right? All technology has influenced my practice and continues to. I just made a work using advanced animation technologies, I use all kinds of media to produce works. I produce works using all kinds of tools that we have available. I go between all types of technology at every point of my day

[INTERVIEWER] We talk quite a bit about the importance of intellectual property.  We usually think about it in terms of whether someone is infringing on someone else’s IP.  For artists, I’ve always felt that it’s a much different inquiry:  artists are always informed, inspired, drawn to, pushed away from the content that they confront on a daily basis (art, movies, pictures, words, images, etc.).   As lawyers we often forget that the entire point of IP is to increase and enhance creative endeavors (not to stifle them).  As an artist working in so many different mediums, how do you think about IP in terms of your creative process (if you think of it at all)?

[XAVIERA] That’s another amazing question- I think about originality every day and I do believe in the taking care of my intellectual property because there are works that I construct that have a “way” about them. That “way” is my intellectual property. I can’t go any further than that except to say that it’s important to me to construct new paths and new ways of thinking. I have a “way” of working and creating that is distinctly my own. I want my studio’s output to be respected and also cared for as unique unto itself.

Of course, we are all influenced by so many things, but each artist has a way of crafting that is distinctly their own and they should be able to have that be their property as a piece of music or film or choreography or a book. But I do draw from the well of thought, so I have to always consider what’s ok to draw inspiration from given the context of a work

[INTERVIEWER] We need to eliminate systematic racism and oppression in the United States.   You are an artist who has frequently makes work that addresses these topics.  You’ve also made work about slavery, education, and segregation.  Artists — generationally as a community — have made work that relates to these topics for a long time.  What is the role of an artist in 2020, and what is the role of your audience?

[XAVIERA] Artist’s play so many parts in our cultural and political narrative. We are critical because we make visible the complexity of human existence. Artist is a broad term to describe so many types of people, their jobs and the crafts they choose to pursue. Also, all artists working in the United States are speaking about these things in some way. Art is tied to labor, commerce and Capitalism which are tied to systemic racism in the United States.

This question is so loaded- eliminating systemic racism means breaking open wide the construction of race, law and capitalism and what these things were used for and how the country was built.

You have to break open whiteness first, and then you have to start pushing against every system we have built in the United States. That’s going to take all of us or a good amount of us. It’s happening somewhat because we are all so much more connected through technology. I want the “audience” to keep going deeper and have the active conversations we need to have, all of them.

We can speak about the form and content of all works. Let’s expand our language to speak on the difficult conversations and ultimately let’s shed the skin of what’s holding us back systemically. Let us trust the thinkers, the researchers, the historians, the artists to help guide the way to a new era in this country. The time is now. 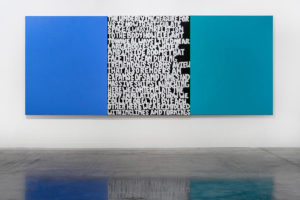 [INTERVIEWER] Jeff Tweedy, songwriter and singer of the Chicago-based band Wilco, is leading a charge to provide reparations in the music industry.  His promise and proposal is for all songwriters to donate 5% of their “writer’s share” to a fund that distributes money to racial justice organizations throughout the country.   Do you believe that this is a worthwhile approach, and do you think that a similar approach could or should be implemented in the visual art world?

The United States was built on the backs of Black Americans who descend from a specific type of slavery– chattel which means forever enslaved. Meaning my ancestors were the property of white (and other) people for centuries. They and their offspring were property as legal by local and federal United States laws. Reparations has to come from our government and paid through whatever means by everyone who lives here.

Everyone who has ever lived in the United States has benefited from the institution of slavery and it’s after-effects. Even if you moved here last year or three decades ago, even if your family didn’t own enslaved persons you moved to or lived within a country that was built on slave bodies whose descendants are here and demanding repair.

Newcomers moved to a country that has not apologized or settled a debt it owes to the individuals who built the country with their blood, sweat, tears, labor, joys, love and despair.

Slavery in the United States meant a slaveholding family owned not just the enslaved person but also their unborn and future children and their children for almost 3 centuries.

You cannot un-ring that bell-

So, individual or local reparative actions are not true Reparations as they do not lift the group as a whole. But have at it Jeff Tweedy, do your thing- support communities but also advocate for true reparations which must come through the federal level.

We have to get comfortable with the idea that reparations will involve an entire suite of processes and it will involve individual Black people receiving compensation for their ancestors’ labor and their own subpar bottom caste lives that are baked into the United States.

The United States is a racial caste system where Black people whose ancestors were enslaved are the bottom caste. We have to get comfortable with the idea that reparations mean individual Black people whose ancestors were enslaved here for centuries will be given reparative monies along with other initiatives as well as legal federal protections and shifts.

Giving to institutions or setting aside 5 percent is not the same as giving to individuals and letting individuals have freedom to do what they wish with their resources. It’s also not the same as a federally mandated program which is what will be needed the most for us all to recover from systemic abuse.

The purpose of reparations is to make individuals and communities whole and to repair damage. Centuries of damage are going to have to come with centuries of repair on a governmental level. I am ready for it. We have to stop being paternalistic with Black people. We, as a group, don’t need someone to hold our monies for us via an organization.  So, if I had Jeff Tweedy in a room, I would advocate for him figuring out a way to give INDIVIDUAL Black people who descend from slavery monies. It can be to musicians or midwives or lawyers or teachers or whoever so long as their family is tied to the institution of slavery here in the United States.

If there were a fund for black led organizations tied to the purchases of art works, that would be wonderful. But that fund does not take the place of reparative justice on the federal level. Reparations has to be embedded in the fabric of the United States as slavery built the ground on which we step each and every day 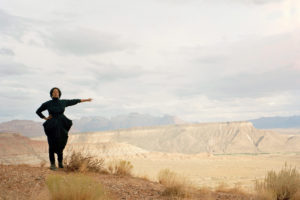 [INTERVIEWER] I am in love with your text pieces and am grateful to own one (thank you David Castillo!).   Living with a relatively large-scale text piece has been really interesting.  For me, it’s rare that I step back and absorb the piece as a whole, like a poem; when I do, it’s a lot like reading a (really great) poem.  But most of the time, the letters and words become shapes and forms that take me somewhere else, off the canvas and outside of the English language.  I am always amazed by how that work has transformed for me over time, from letters and words to something much more abstract.  I am curious what it was like working exclusively with letters for the first time, and how did you avoid giving a specific meaning to something that literally has a definition?

[XAVIERA] I love your questions and I love that you live with my work. Language and letters are so mysterious to me, how we developed a way of letting each other know our internal vocabulary and how to imprint our internal expressions onto each other. I don’t want to unravel the work for you, actually I may not be able to do that because the mystery is in the process. I will say that I hear images, I also translate an interior language onto the canvas. I love the idea of living with language and having a way to use language beyond printed and spoken forms. Language constructs how we operate and puts meaning to our interior rumblings. I actually cannot articulate the depths of meanings inside of those texts works because I craft them as a sculptor would or as a film director- The depth of meaning, the labor to produce the work and the molecules of who I am are tied into every work that I produce. I am very intentional.