Copyrights at the Olympics 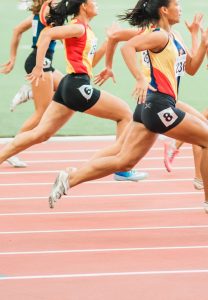 The International Olympic Committee (“IOC”) is the governing body that manages most aspects of the Olympic Games, including the broadcast of any footage from the Olympic Games. In an effort to raise funds, the IOC sells its broadcast rights to various networks and these rights allow the networks to exclusively show the Games on television, radio, the internet, etc. This practice raises billions of dollars for the IOC and that money is, for the most part, allocated to maintaining the committee, as well as the event itself. For context, in 2014, NBC paid $7.75 billion for the rights to broadcast the Olympics in the United States until 2032.

“The very value of the copyrights is in displaying these world- class athletes, many of whom rely on sponsors and the use of their likeness to earn a livelihood.”

At the 2020 Tokyo Olympics, Elaine Thompson-Herah of Jamaica won gold medals in both the women’s 100-meter and 200-meter races. In celebration, she posted clips of footage from her races to her Instagram account. In response to a notice of copyright violation, Instagram proceeded to block her account. Many were outraged that broadcast holders and the IOC would derive benefit from distributing Thomspson-Hera’s likeness but would not allow her to post clips sharing her accomplishments. The very value of the copyrights is in displaying these world-class athletes, many of whom rely on sponsors and the use of their likeness to earn a livelihood. In response to this criticism, the IOC affirmed that its broadcasters have the exclusive rights to broadcast the Olympic Games and that it would not allow athletes to post broadcasted content.

On a separate but related note, critics of the IOC have alleged that the IOC uses the intellectual property rights in broadcast footage to suppress criticism on social media. For example, at the 2010 Vancouver Olympics, many alleged that the IOC issued copyright takedown notices to social media users that posted footage of a tragic accident involving Georgian Luge athlete, Nodar Kumaritashvili. Indeed, in the build-up to the 2010 Olympic Games, the IOC had come under fire for utilizing a luge track that was considered by many to be too fast with dangerous turns.

More recently, the United States and several other countries joined in a diplomatic boycott of the 2022 Beijing Olympics in response to the Chinese government’s human rights violations with respect to Uyghurs and other Muslim ethnic minorities in that region. In the opening ceremonies of the 2022 Olympics, an Uyghur athlete delivered the final Olympic flame. Given the diplomatic boycott, many were quick to use this footage on social media to voice their opinions and concerns on the situation. In turn, many saw that their posts had been removed and they had been sent notices that their posts infringed upon the copyrights of the broadcast holders. This moment was clearly meant to be provocative and political in the face of all the international criticism of the Chinese government. The topic is inherently newsworthy and important; and yet the IOC and broadcast rights holders were quick to enforce their copyrights.

Here, the Olympics should be considered a fairly newsworthy topic. Moreover, controversies and political happenings at the Olympic Games are certainly a matter of public interest, and broadcast rights holders would be hard-pressed to argue that the above examples are not subject to public concern. Indeed, commenting on the political message of the 2022 opening ceremonies is distinct from broadcasting the entirety of the ceremony. While the IOC derives great value in selling exclusive broadcast rights, the public also understandably has an interest in commenting on and criticizing these pivotal events. Copyright law is meant to protect the rights of creators and prevent theft of original work; however, copyright law is not meant to suppress the freedom of speech. As the growth of social media continues to change the broadcast industry, the IOC and Olympic broadcast rights holders should consider implementing a balanced approach to intellectual property in which the newsworthiness of events is given equal weight to the value of exclusive rights of copyright holders.