A Word from Vivek 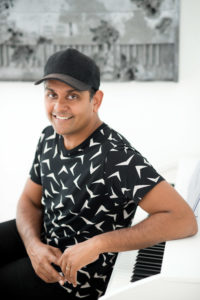 At some point early in the last decade, I was introduced to a plumber named George from Los Angeles.  He said he needed some help licensing a piece of film to a production team interested in using it in a documentary.  George explained that on the evening of March 3, 1991, he was toying around with his new camcorder, a recent gift from his wife. That night, while on his balcony, he used the camcorder to film LAPD officers overpower and assault Rodney King, a Black man whose senseless beating exposed the realities of police brutality against Black people.  Not just in Los Angeles but around the United States. George is a great guy.  As a copyright lawyer, I eventually helped him license that unforgettable video to a variety of television shows and movie studios so that this important footage could be used to expose racial injustice and police brutality in the United States.George has been on my mind quite a bit since our last issue back in the early days of the COVID-19 pandemic.  That’s because another George, George Floyd, was killed by Minneapolis police officer Derek Chauvin on May 25, 2020.   Mr. Floyd’s death has brought to the foreground America’s inability to eliminate systematic racism, inequality, and police brutality.

Soon after Mr. Floyd’s death, we committed hundreds of hours of pro bono time to battle issues of racial injustice and to fight for equity.  We’ve already put some of that time to use, and during this process I have been reminded of the extraordinarily unbelievable work that organizations like the Southern Poverty Law Center and the Federal Defender’s offices have done for so many years to make real progress on the causes that we all deeply care about: a decent education for all children, equal access to the voting process for everyone, and fair treatment and punishment for defendants in criminal cases.  We stand strong on these issues.

During times like these leadership everywhere is important.  So, I am thrilled to announce that Heidi Echols has made partner here at Jayaram.  A former partner at McDermott Will & Emery, and alumna of the University of Chicago Law School, Heidi’s expertise in data privacy and healthcare IT law is extraordinary.  You can read a bit more in this issue about her family and how she represents some of the most innovative and visible healthcare companies in the world.  We are all fortunate to have leadership like Heidi’s at Jayaram.

In this issue we ask acclaimed contemporary artist Xaviera Simmons about the role of an artist in 2020.  Xaviera, whose work is displayed in the New York Museum of Modern Art, is an extraordinary artist with a practice rooted in an ongoing investigation of sensory experience, memory, and abstraction within present and future histories.  She works in photography, performance, painting, video, sound, sculpture, and text.  She is a powerful activist and political voice who once completed an 18-month walking meditation organized by monks that retraced the transatlantic slave trade from Massachusetts across the Caribbean and the Atlantic to Africa.  She’s also a friend and amazing person.

We also talk with Rachel and Nick Cope, design titans and founders of Calico Wallpaper.  The brand, founded by the couple in 2013, “represents the harmonization of a traditional decorative medium fused with technical innovation.”  It’s beautiful wallpaper that we are grateful to have adorning our walls in our Chicago office.  Calico’s work has been featured in places like Design Miami, Salone in Milan, and beautiful places around the world.  I can’t think of a better duo to show us their favorite spaces to work from at home during the pandemic.

Also, in this issue, you will read about the Google v. Oracle case which has now been reset for Supreme Court oral argument this fall.  Arguably the copyright case of the decade, the case will decide whether basic commands of a coding language are protectable.  Speaking of important IP cases, Doni Robinson writes about Justice Ginsburg’s opinion in the Booking.com case.  Palak Patel writes about copyright issues on TikTok, and I think you’ll all enjoy Aaron Ogunro’s piece on data privacy disclosures.

And finally, just prior to press time, we received some good news that I would like to share with you.  As part of the pro bono effort I described above,  we partnered with the Federal Public Defender’s office to seek release of inmates who are either high risk for contracting Covid-19, in prison for non-violent crimes that might not even be considered a crime today, or any other number of “compassionate” circumstances that justify an early release of criminal defendants serving time in federal prison.  I am thrilled, humbled, and proud to announce that Liz Austermuehle and Palak V. Patel of Jayaram Law have obtained the early release of Dante Jones, who was ordered just last week to be released from federal prison pursuant to our motion for a reduced sentence. He can now look forward to being at home with his family. He also looks forward to starting a new life and career.

Summer will be coming to an end soon.  We wish the parents and their children well as we all await the start of the weirdest school year of all time.  Be safe, everybody. I hope to see you soon.