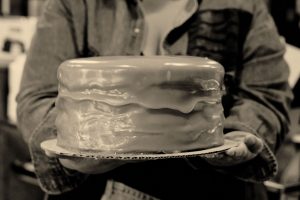 When I was asked to write a piece for The Innovator on a favorite culinary moment, the request reminded me of when my heart was set on a caramel cake while I was pregnant with twins. On my quest to satisfy this craving, I ate a variety of caramel cakes from several stores and bakeries, yet none of them possessed that particular taste that I was seeking. Finally, my Great Aunt (on my mother’s side and one of the best bakers in the family) made me one from scratch. Although those that partook in eating it were euphoric…my discriminating palate—coupled with my fickle twins—fiercely rejected it.

Later that night, as I was lying in my room, my phone rang and it was my Great Aunt (on my father’s side) checking on me from the British Virgin Islands (BVI). It was only a matter of time before I told her of my dilemma of trying to locate a caramel cake that would satisfy my unborn twins and myself. This was when she informed me that she would be in the states in a couple of weeks and, upon her visit to Chicago, she would make me one.

Those two weeks couldn’t come fast enough. When she arrived, we met at my cousin’s house. There she greeted me with clothes for my daughters along with a few articles for myself while the sweet aroma of caramel filled the air. I could hardly contain myself at both the prospect of being with my loved ones and the chance to try this cake! After playing catch-up, she brought me into the kitchen. This is where I saw her newly-baked masterpiece on the bottom half of a Tupperware cake container on the counter.

I remember looking at the caramel cake and noticing how slowly it was moving. I then pointed to it and said: “Aunt Sharone, the cake is moving on the platter.”

“That means it is a good cake,” she casually responded as she reached for the knife and then cut me a slice.

I must admit, I was anticipating what I got in the past: nothing; ergo, my expectations were low. As Aunt Sharone gingerly handed the dish to me, she could see the potential disappointment from the expression on my face. When she gave me a fork, she leaned against the counter and patiently waited for me to take a bite…I did…and I was so pleasantly surprised by its unassuming flavor. From that moment on, every sapid morsel was savored. Before I could ask for another slice, it was already prepared. I also remember how my daughters fondly responded. They started moving; my aunt could see their motion via my linen overalls.

“I see you are not the only one that likes it,” Aunt Sharone confidently ascertained. “May I have another… it’s for the other twin,” I hungrily quipped and then asked, “How come yours tastes so good?”

As she passed me another slice, she rubbed my belly, smiled, and said, “You probably don’t remember…but when you were a child, this and homemade ice cream were your favorite desserts. You would always ask me to make them for you. But, I must admit, I was taken aback when you mentioned the caramel cake on the phone because it had been so long. When you came to the U.S., you slowly strayed away from your culture…and don’t get me wrong, it is not your fault. These things happen. You were born here and live here now, but you’re not really from here.”

As the tears cascaded down my face, Aunt Sharone took a napkin and wiped them as she continued speaking,

“To answer your question, it tastes so good

because it is what you know – it is home.”

Suffice to say, I damn near ate half of that caramel cake during my visit. Over the next few days, I annihilated it, and for those wondering: no, I didn’t share. When the last slice was eaten, I went into labor the following day, and then only a few short weeks afterward, my Aunt Sharone died. Surprisingly, her caramel cake was at her memorial repast. She had baked it for some upcoming event, but thankfully someone decided we would appreciate it more (and rightfully so).

That was the last time I went home. Since then, I’ve asked various relatives if they have the recipe. Unfortunately, different variations circulated throughout the family; however, none of them compared to Aunt Sharone’s version. Hers quite literally ‘took the cake’, as they say. No pun intended.

So, if you’re looking for that special sweet that hits the spot, you can always look up recipes for similar caramel delights like Aunt Sharone’s, but you might not quite find one that hits home like this one. I suggest instead to really think of home, and what sweetened your day as a child, because most of the time we don’t appreciate its impact…until we’re adults.