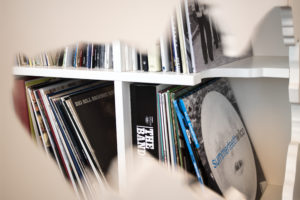 I really enjoy listening to music on vinyl.  I don’t, however, listen to just anything on a turntable.  There are certain kinds of rhythm driven music that I prefer listening to only on vinyl.  It’s impossible to select my favorites.  I don’t even own many of my favorite LPs on vinyl.  But it’s easy to pick 15 records that I can listen to at almost any time and any place.

Art Blakey & The Jazz Messengers, “Moanin'” — Of course there’s Kind of Blue and Ellington at Newport, but when I think of jazz in the late 1950s, this one immediately comes to mind.   Drumming this good sounds otherworldly on vinyl.

William Onyeabor, “Who is William Onyeabor?”  — This is a 2013 compilation of Onyeabor’s music, released by David Byrne’s outstanding Luaka Bop records.  Epic and led by a strong rhythm section and psychedelic synthesizers, it’s is a Nigerian funk rollercoaster.

Wilco, “Summerteeth” — What can I say?  Anyone who knows me knows that this has been on every “best of” or “favorite” list I have ever made since its release in 1999.  I feel like the influence of so many great songwriters before then — John Lennon, Dolly Parton, Bob Dylan, Brian Wilson — finds its way onto this record.  Yet it sounds completely original and timeless on its own.

Reggae on Sunset, “The Numero Group Guide to Dub & Reggae” — This is probably my favorite reggae record.  Everything Chicago’s Numero Group puts out is interesting, if not lovable.  Yes, there’s Toots and Marley, but there are some more obscure gems from artists like Phyllis Dillon and Kristin Penn.

LCD Soundsystem, “Sound of Silver” — One of my favorite music memories is seeing LCD Soundsystem’s last show (except it wasn’t) at Madison Square Garden in April of 2011.  Sonically, the DFA production sounds incredible on vinyl.  But for me, this one reminds me of a very fun and special period of my life where nobody had kids and we would see live music multiple times a week.

Billie Holiday/Teddy Wilson, ‎”Teddy Wilson and His Orchestra Featuring Billie Holiday” — I am not a specialty vinyl collector (early or rare pressings, limited editions, etc.).  But this one’s a collector’s piece.  I found it in Paris after spending the summer falling in love with it on my headphones. 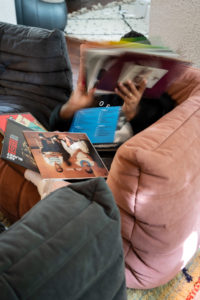 Elliott Smith, “Figure 8” — The best songwriter of our generation got a bigger label and budget and created a(nother) masterpiece.  The drums, played mostly by Smith, sound warm and explosive on vinyl.  And the cover seems now as though it were designed for a gatefold, not a compact disc.

Jamie XX, “In Colour” — I probably bought this record because I was a fan of the XX and the cover artwork is killer.  But I had no idea I would end up loving this record way more than anything by the XX.  “I Know There’s Gonna Be (Good Times)” feat. Young Thug and Popcaan is a standout track.

Kanye West, “My Beautiful Dark Twisted Fantasy” — This record sounded unlike anything else I had ever heard before.  In the first 10 minutes we get baroque, soul, and electro samples, and the rest of the record — opulently produced by West — is like a history of modern western music floating underneath frenetic lyrics about celebrity, wealth, and what it’s like to be Kanye.

Radiohead, “In Rainbows” — This might not be my favorite Radiohead record, but it’s the best sounding Radiohead record on vinyl.  I remember listening to “15 Step” on my turntable the day that I got it and thinking to myself “it sounds like they are in the room.”

Beastie Boys, “Paul’s Boutique” — So I am going to cheat a little on this one.  I have the 180g import reissue which sounds great because it’s a really great album.  But a friend of mine in Chicago played the Capitol original LP for me on vinyl and — I swear I am not being a snob — it sounds unimaginably magical.  There’s a reason Miles Davis said this was a favorite of his.

Solomon Burke, “Don’t Give Up on Me” — Tom Waits, Elvis Costello, Bob Dylan, Nick Lowe, Brian Wilson, Kathleen Brennan, Cait O’Riordon, and others wrote these songs for the 2002 comeback of this Philadelphia soul legend.  It’s a shame that I haven’t yet dug deep into his catalog given that I dig this record so much.

Darjeeling Limited, Motion Picture Soundtrack — Indian classical music and Bollywood tunes were playing in my house all the time growing up.  But it’s not the music I intentionally listened to as I grew older.   This record is such an unusually flawless collection of songs from legends like Satyajit Ray, but also tracks from famous western artists like The Rolling Stones, Joe Dassin, and The Kinks that give it a European vibe.

Etta James, “At Last” — 1960, Jackpot Records.  This record definitely gets weekly airplay at my house.   The title track is the hit, but “Sunday Kind of Love” is my favorite.   She’s got the kind of voice that makes me stop whatever I am doing and listen.

Tortoise, “Millions Now Living Will Never Die” — Now I am being a snob.  This record, released in 1996 on Thrill Jockey Records, opens with a 20-minute anthem called “Djed ” that some say takes its listeners on a tour of every genre of music in the 20th century.  That in and of itself makes it one of my favorite all-time A sides.